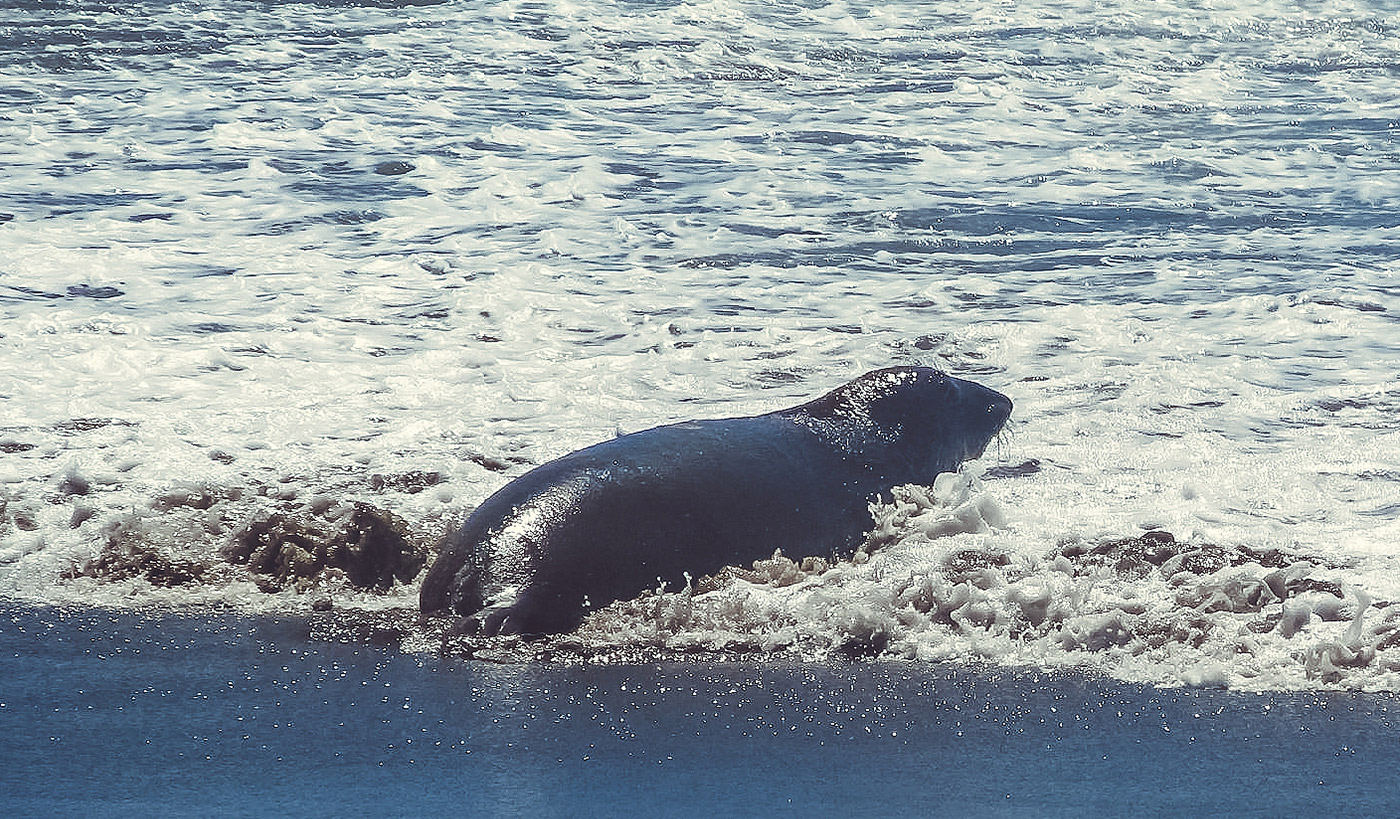 The seals employ a grab and swallow technique of feeding, taking such prey as hake, dogfish, rays, octopus and crabs, generally from the ocean bottom. The danger from orcas is greater here than in mid-ocean depths, but the quantity and quality of food allow the adult males to gain the weight they need to survive their fasts in the rookery and the roughly five months a year travel time between the rookery and feeding ground. Their two foraging trips are approximately equal in length at four months for older males and five months for juveniles.

The female seals do not grow as large as the adult males. Females spend two more months at sea each year than males do.  They forage primarily in deep mid-ocean water, typically feeding at depths well above the bottom. Their vast foraging area is indicated in the red spots on the map below. Recent evidence shows that their diet is primarily lantern-fish, hake and ragfish, with less than 10% squid.

Even during the day it is very dark in the deep water where they hunt for food. Their eyes are particularly sensitive to the bioluminescent colors of prey, such as lanternfish and squid, at their foraging depths.

Unlike the males, the two foraging trips of adult females are of quite different lengths – approximately 2.5 months between weaning their pup and returning to molt and 7.5 months between the end of the molt and birthing. During this longer second period, the female is nourishing her baby as well as herself. Evidence suggests that their daily food intake may average 20 kg (44 lbs.) and be as much as 32 kg (70 lbs.) per day. Weight gains of 1 kg (2.2 lbs.) per day at sea are typical for pregnant females.

Where Do the Seals Go When They Aren’t at the Rookery?

The seals live solitary lives at sea for 8-10 months of the year, spending 90% of their time deep under water. They routinely dive 1,000 to 3,000 feet (300 to 900 meters), staying down an average of 25 minutes before returning to the surface to breathe for 2 – 3 minutes. However, individual seals have been known to dive to 5800 feet and to stay down as long as 2 hours. This behavior continues 24 hours a day for periods of several months, uninterrupted by visits to land or longer periods on the surface. Seals can travel 60 to 75 miles per day, but feeding slows them down to about 1/3 of that speed.

The male seals typically forage for food in focal feeding areas (blue spots along the coastline below), at the edge of the continental shelf, from Oregon to as far west as the Aleutian Islands.  The shelf drops off into deeper water, an area called the continental margin, where the seals hunt for a variety of prey. Their feeding areas can be as far as 3,000 miles (5,000 km) from their rookery on the Central Coast of California. 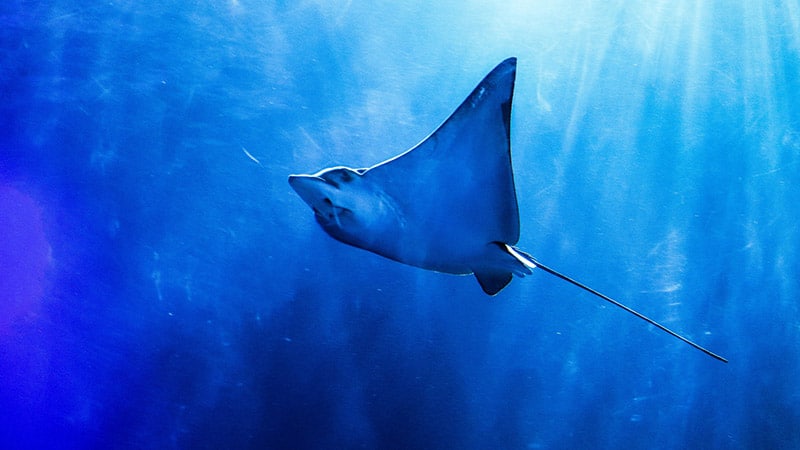 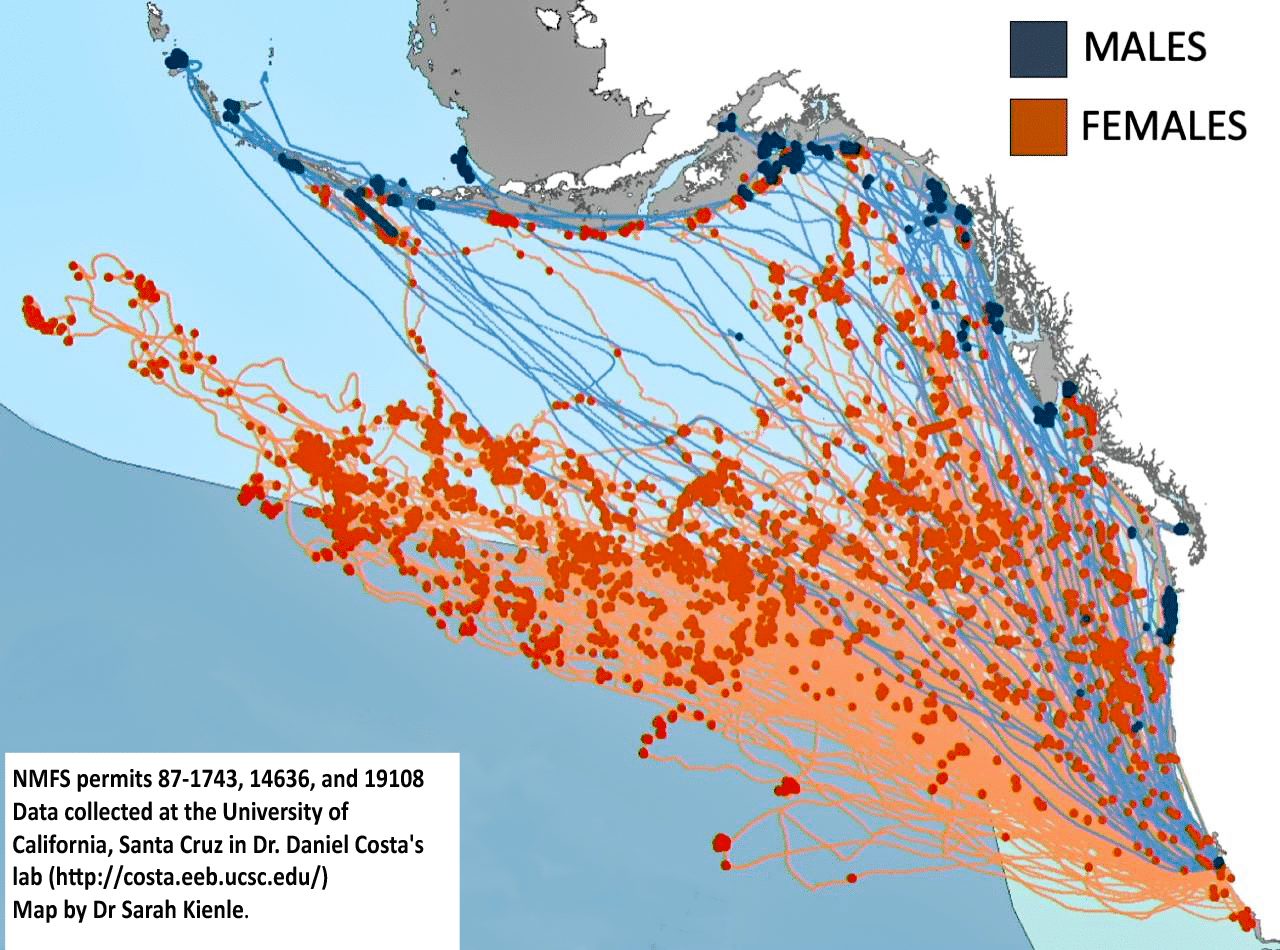