Find answers to the most common questions about the elephant seals at the Piedras Blancas Rookery.

Where is the Elephant Seal Viewing Area?

The Elephant Seal Viewing area is located in San Simeon, California, 4.5 miles north of the Hearst Castle entrance on Hwy 1. Here is a link to our locations. Please check the Plan Your Visit page on this website for more information.

How can I see the elephant seals?

Visit the Piedras Blancas rookery! There are viewing walkways at each end of the parking lot, which are part of the California Coastal Trail and are wheelchair accessible.

Please observe these guidelines – they are for the comfort and safety of you and the seals!

Are there always elephant seals at the rookery?

Yes, there are always some elephant seals here, although they become very sparse by the end of summer. Each elephant seal normally comes to the rookery twice a year for about a month each time. The adult males are an exception – they are here one month in the summer and around three months in winter.

Think of the rookery as a timeshare, with each seal having its appointed time on the beach!

Is this their only rookery?

There are a number of rookeries on the Pacific coast of North America, stretching from Baja California in the south to Race Rocks on Vancouver Island, Canada in the north. Most elephant seal rookeries are on islands, with the largest colonies on the Channel Islands. Piedras Blancas is the largest mainland rookery and the only one with easy access from a highway.

Where are the big males?

The large males, those with the big noses that give elephant seals their names, are only on the beach in July-August to molt and in December-March for the birthing and mating seasons. They spend most of their lives at sea foraging off the coast of Alaska in the Aleutian Islands.

How BIG are they?

How much time do they spend at sea?

They dive for 20 minutes to over an hour, surface and breathe for 2 to 4 minutes and then dive again. They do this  24 hours a day, 7 days a week. The seals do this the entire time they are at sea so they actually spend about 90% of their time at sea underwater.

How deep do they dive?

How do they stay down so long?

Elephant seals have made a number of adaptations in order to dive so deep and stay down so long. Before diving, they exhale. Empty lungs allow them to dive with little effort, and without developing the bends. The pressure actually deflates their lungs completely.

Their lungs have cartilage ribbing in them, which allow them to spring back and inflate upon coming to the surface. In addition to getting their oxygen from air in their lungs, they store it in their blood and muscles. They have twice the blood volume and 50% more red blood cells than a land mammal of their size, and large amounts of oxygen-storing myoglobin in their muscles.

In addition, they undergo significant physiological changes as a part of their diving reflex. Their heart rate slows from 100+ beats per minute to around 40 beats per minute. They are able to divert the flow of blood from their extremities and restrict it to just their vital internal organs – especially their heart and brain. These changes allow them to use less oxygen.

How fast can they move on land?

On soft sand they can move faster than most humans when they perceive a threat to themselves or their harem.

Why did they start coming here?

As the elephant seals rebounded from near-extinction, they first re-established colonies on the islands off the shore of Baja California and California. When these rookeries became too crowded, they began colonizing mainland beaches.

They began coming here in 1990. The Piedras Blancas Rookery was populated from San Miguel Island, San Nicolas Island, and Ano Nuevo. Elephant seals like large sandy beaches that do not have a significant human presence. The rocky areas in the shallow waters provide the weaned pups some protection from breakers while they are learning to swim. The kelp forests, which are not far off shore, and the shallowness of the sea bed could help the seals avoid predation since shark attacks are more common in deeper water.

Do they come back to the same rookery each year?

Most elephant seals return to the beaches where they were born. However, overcrowding or failure to successfully wean a pup can prompt them to move to another rookery.

Why do they flip sand?

Their bodies are designed to keep warm in cold water. Sand flipping helps them keep cool on land by acting as a sunscreen. In addition, they sometimes can be seen flipping sand under stressful conditions.

Why do they just lie there? Are they dead?

People frequently think the seals on the beach are dead because they aren’t moving or breathing. Actually, they are just conserving energy. During the time they are ashore they are fasting. They rely on their stored fat to meet their water and energy needs, so their bodies are programmed to rest as much as possible while on land.

In addition, they practice a form of apnea; a breath-holding state. During apnea, their heart rate decreases. Apnea can last as little as 8 minutes in weaners and up to 25 minutes in adult males.

Do they go out to eat at night?

The elephant seals do not eat while they are at the rookery. They live off their blubber, relying on it to provide water and energy. While they are ashore for birthing and breeding, the females will lose 30 to 40 percent of their body mass. Large males, who fast for 3 months during the breeding season, will also lose about a third of their body weight.

Weaners practice at night to learn to swim and dive in preparation for the dark of the ocean depths in which they will feed.

What do they eat?

In the open ocean, where females spend almost all their time, there is evidence that they feed on small bio-luminescent creatures such as squid and lanternfish.  Less is known about feeding opportunities along the continental shelf where the other seals hunt for food. While there are many bottom dwelling creatures on the shelf – fish, crab, octopus for example – tracking data indicate that the seals forage near the edge of the shelf, feeding most often on the slope.  What prey is there in large quantity is unknown.

Why do they molt?

In order to dive so deep and stay down in the cold ocean so long, the elephant seals have had to make a number of adaptations. One of these adaptations is that during dives the flow of blood to their skin and extremities is limited – sending blood mostly to their brain and core organs. In order to get healthy new skin, elephant seals need to spend about a month on the beach so that their blood can circulate continuously to the skin without an excessive loss of body heat.

This annual month long process of shedding their entire outer layer of skin and hair is called a catastrophic molt.

How can you tell males from females?

Only males develop the large proboscis. It starts to grow when they enter puberty at about age five and, by the time they are nine, their nose is over 2 feet long. Before puberty, the only way you can tell is by looking at a seal’s abdomen. Both males and females have navel indentations about 2/3 of the way down their bodies. Slightly further down are two nipples – more prominent on the females. Males have an opening for the penis, between the navel indentation and their pelvis.

Why do adult males have a large nose?

Do big males fight to the death?

Rarely. During the breeding season, bulls battle each other for the right to breed with the females. These confrontations are often bloody, but rarely result in serious injury to either bull. The neck and chest area of a large bull is protected by a thick layer of blubber and has scarred calloused skin.

At the peak of the breeding season around 90% of the adult males have fresh wounds obtained from combat. Fights can last from a few minutes to half an hour or more, depending on how evenly matched the bulls are. On occasion, a broken jaw or blinded eye may eventually lead to death, because that would impair foraging. Most mortality occurs at sea.

The younger males, often seen sparring either on the beach or in the shallow waters offshore, are learning how to fight. For them, as for other young male mammals, this is playing rather than fighting. Elephant seals are very seldom injured in this activity.

How old are they when they begin reproducing?

Males enter puberty around 5 years of age, but they don’t reach their full size and maturity until they are around 9. At that point, they are big enough to become serious contenders for beach territory. Some males never are able to win sufficient fights to get land and a harem.

The prime breeding age is between 9 and 12. Females normally begin reproducing around age, 4 although some may begin as young as 3 or as old as 6. They become physically mature and stop growing in length at age 6.

How long do they live?

How many females are in a harem?

The number of females in a harem varies according to the topography of the beach. There may be as few as 10 and as many as 50 females surrounding an alpha male. He protects his females from the amorous attentions of other males.

Do mothers just have one pup?

There is no record of any northern elephant seal having more than one pup. Pups need to grow from 60 to 80 pounds at birth up to around 300 pounds in just one month. Mothers, who don’t eat while nursing, don’t have the physical resources to get more than one pup to that weight in this limited time period.

How long do the pups spend with their mothers?

Mothers spend about one month with their pup. Their milk is among the richest of any mammal, averaging 55% fat. At the start of lactation, the fat content is lower and the water content higher. By the end of lactation, the fat content reaches 65% and has the consistency of mayonnaise. Human milk is 2 to 4% fat, cow’s milk 3 to 6%. The pups go from 60 to 80 pounds at birth to 250 to 330 pounds at weaning, quadrupling their birth weight. 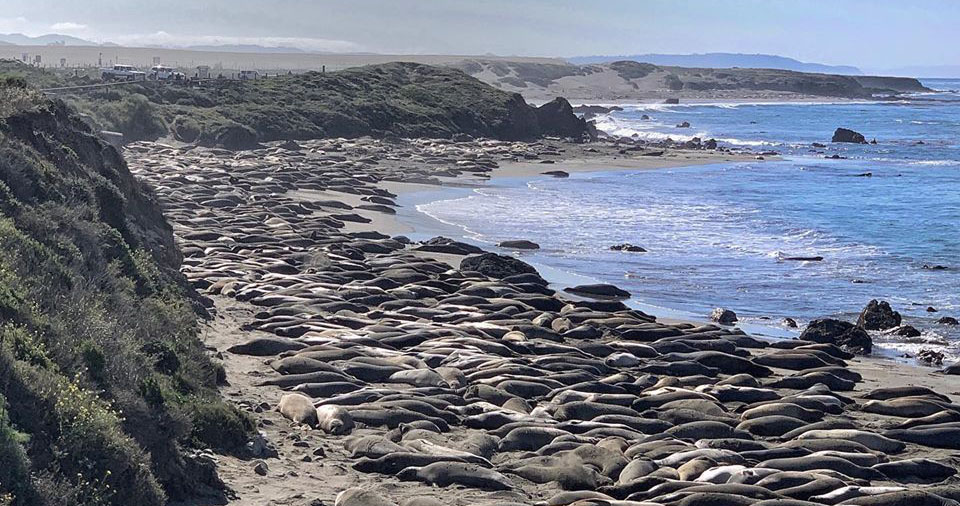 Seals on the sand 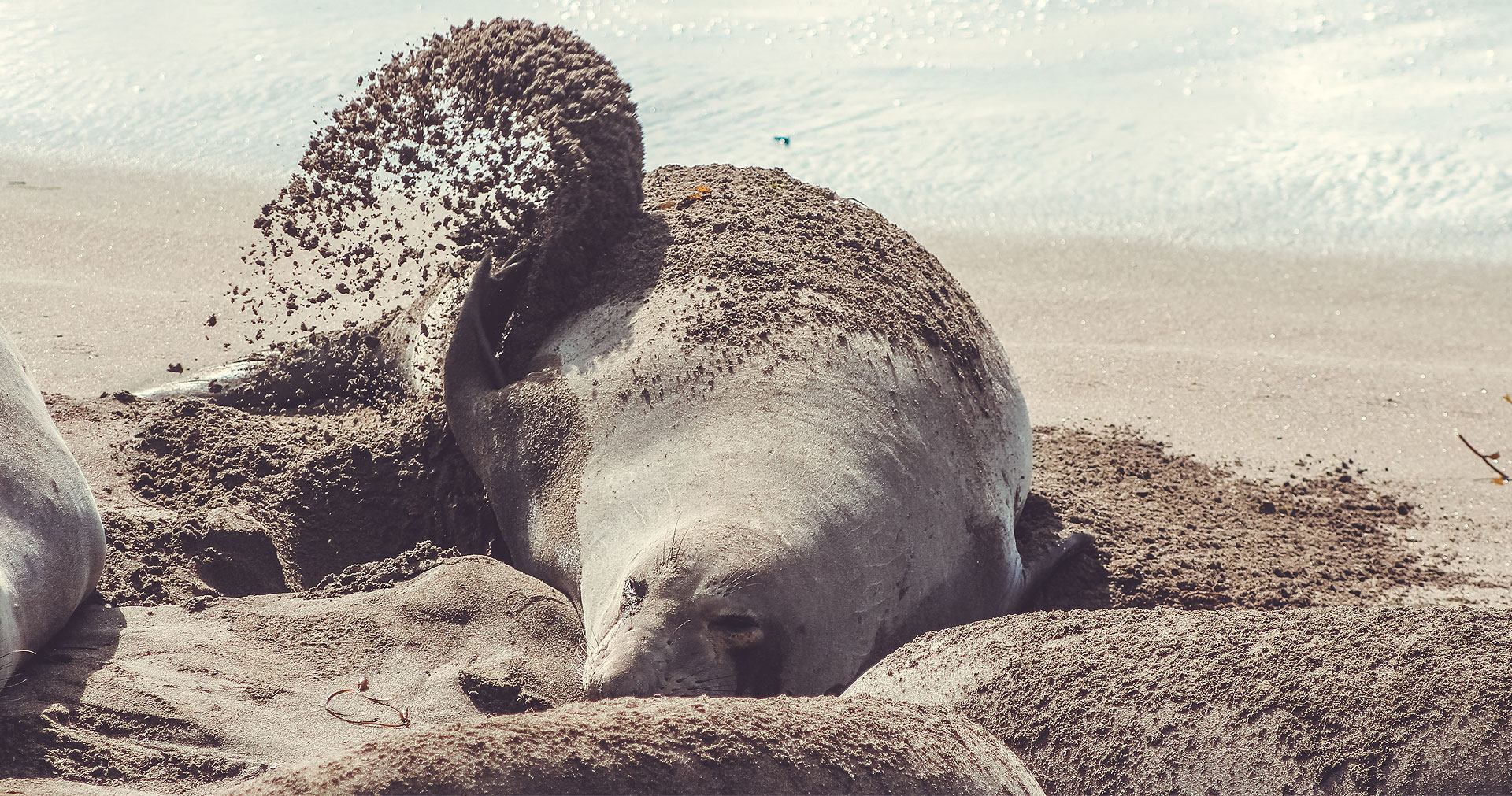 What's Happening On The Beach?

Month by Month at the rookery

The number of seals at the rookery peaks three times during the year: in late January when most births have occurred, around the first of May at the peak of the juvenile/adult female molt, and in late October during the fall or juvenile haul-out. The annual cycle begins in November with the arrival of mature males at the end of the month.

Why Elephant Seals Are Awesome