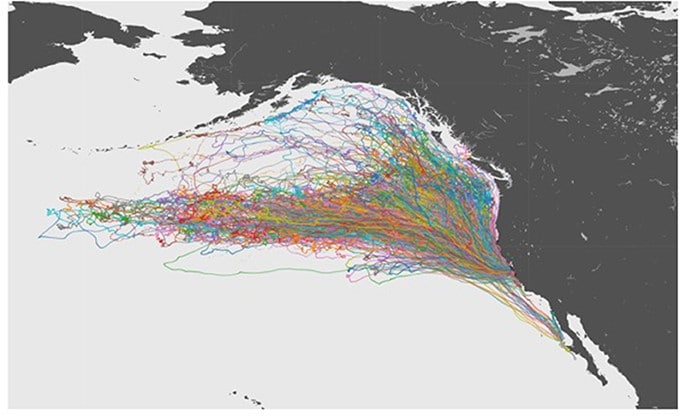 A recent study produced some results and a presentation that is very interesting.

Data on the tracking of 321 adult female seals were used to produce a “chorus” that captured some characteristics of their sea voyages-roughly 80 days post breeding and 200 days post molting. Most of the seals were from Año Nuevo but 20 were from a colony on Islas San Benito, Mexico. The trips took place between February 2004 and May 2014.

Data collected were considerable: over 90,000 seal-hours and over 1 million individual positions. The purpose of the study was to explore the utility of an acoustic presentation of part of this collection of data. Each seal at sea contributes a tone that varies with latitude, lowering in frequency as it moves west. The combination of the tones of all the seals in the ocean at that time has a volume that depends upon the spread of the group: high when close together, low when widely separated.