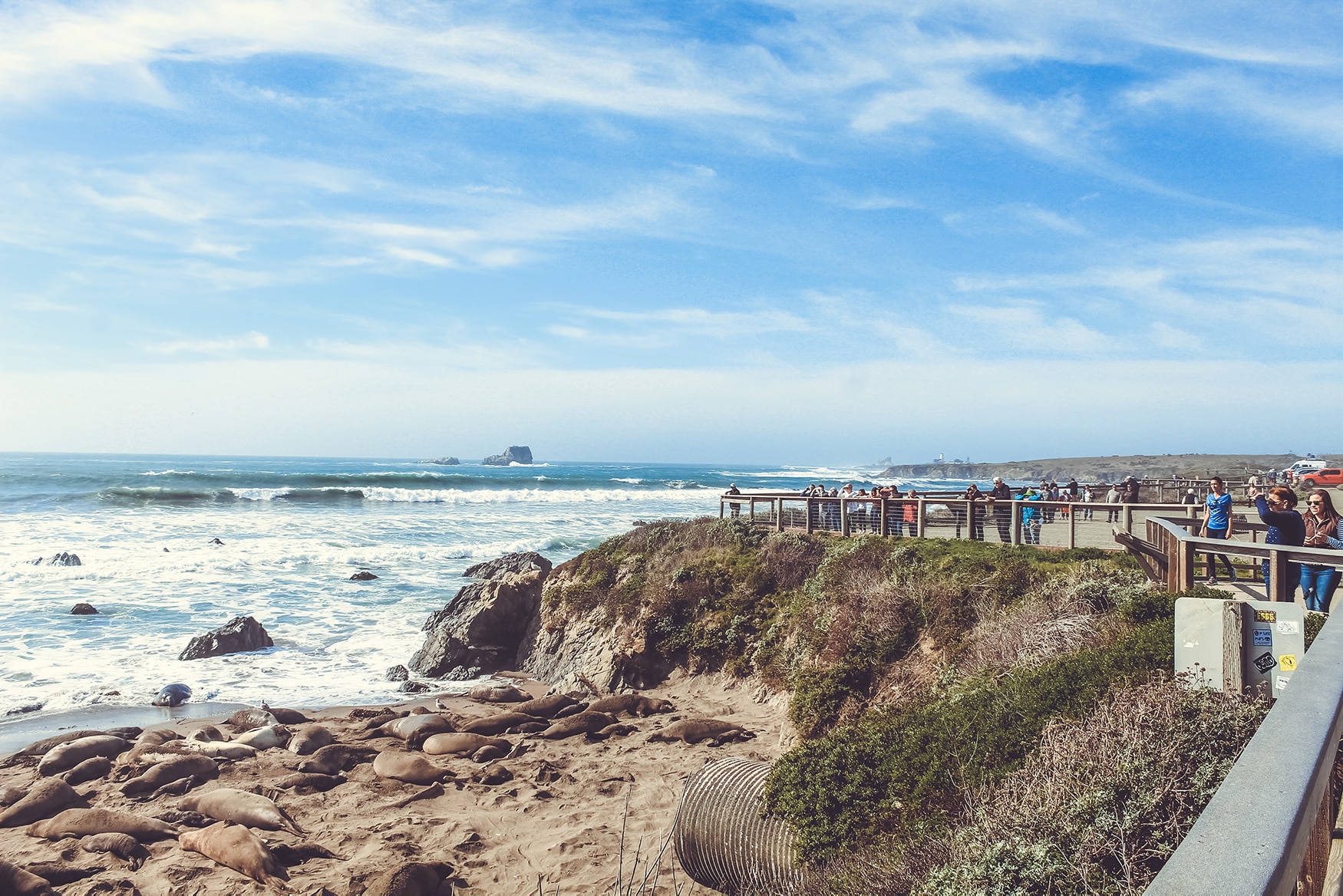 Starting in the 1700s, the maritime fur trade of the Pacific Northwest depleted nearly all species of marine mammals including sea otters, whales, dolphins, seals and sea lions. Elephant seals were hunted almost to extinction for their oil-rich blubber, which was used to make oil for lamps and lubrication. By 1892, fewer than 100 elephant seals remained on Guadalupe Island off the coast of Baja California. By 1900, many species, including the northern elephant seal were believed exinct. In 1922, Mexico granted elephant seals protected status, and the United States soon followed. Since protection, the northern elephant seal population has expanded northward to islands along the coast of California including the Channel Islands, Año Nuevo Island (north of Santa Cruz) and the Farallon Islands off the coast of San Francisco.

By 1982, elephant seals were seen along the Big Sur coastline, more than 100 miles south of Año Nuevo. In 1990, elephant seals were observed on beaches south of the Piedras Blancas Lighthouse. By the spring of 1991 nearly 400 seals hauled out there to molt. In February, 1992 the first pup was born at Piedras Blancas. In 1993, about 50 pups were born. In 1995, 600 pups were born. By 1996 the number of pups soared to nearly 1000 and the colony stretched southward and northward to beaches adjacent to Highway 1.

Conflicts began to occur when beaches historically used by humans were rapidly taken over by elephant seals. Although the Marine Mammal Protection Act of 1972 mandated protection of all marine mammals, the public were drawn to the unique sight of hundreds of seals on the colony beaches. The seals became a major fascination for those traveling Highway 1. Thousands stopped, parked illegally and precariously, then breached perimeter fencing and made their way over private property to view the seals.

Visitors descended the bluffs and approached the elephant seals daily, seizing the opportunity for unique photo opportunities, only a few feet away from resting seals.  Despite signage clearly prohibiting such disturbances, hundreds of people of all ages ventured dangerously close to the seals, some going so far as to try to provoke the seals to react. Wildlife management agencies were overwhelmed by the number of seal-human interactions and had no clear solutions.

Friends of the Elephant Seal was formed in 1997 with the goal of providing education about the elephant seals and other marine life on the central coast of California. Docents at the viewing areas answer questions and help visitors get the most from their viewing experience. Public safety and respect for the seals are prime considerations.

The coastal area that includes the rookery became state property under the control of State Parks in 2006. In 2011, the relationship between Friends of the Elephant Seals and State Parks became formalized with FES becoming a cooperating association with State Parks and our docents at the rookery becoming Volunteers in the Park. 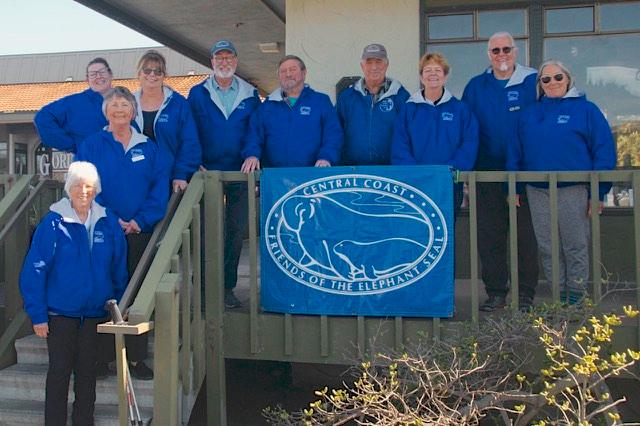 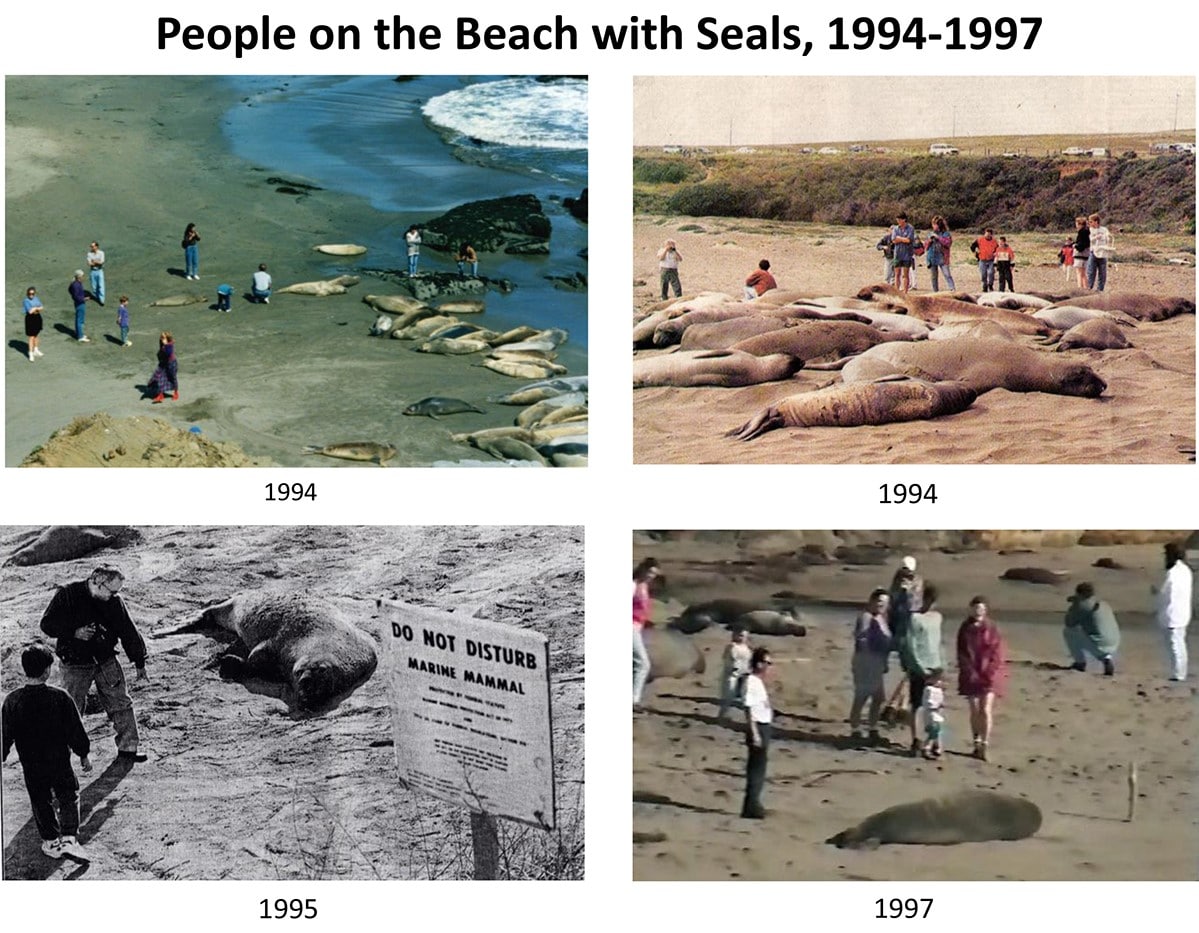