A Tale of Two Seals: Citizen Science At Piedras Blancas 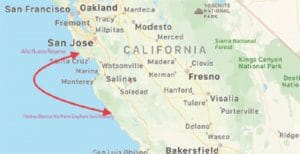 This is the story of two young female seals who were born in different rookeries, to different mothers, within days of each other, 200 miles apart. When researchers tag and mark (with hair dye) elephant seals, it makes it possible to easily identify them throughout their lives, to determine their migration patterns and to know their ages and histories.

Although the larger hair dye marks are only visible until the annual molt, the numbered rear flipper tags often stay in place for many years. Each rookery uses a different color flipper tag, making it possible to know the seal’s origin even when the number is difficult to read.

The following account of two one-year-old elephant seals illustrates what we’ve learned during Spring 2019 about the complexity of their lives and their incredible abilities to explore the California coastline.

After nursing the young pup for 28 days and losing 40 percent of her body weight, her mother departed in mid-February 2018, to return to sea for a two- to three-month post-breeding migration. On February 18, 2018, the Cal Poly, San Luis Obispo research team attached a white flipper tag reading N696 to the young identified as a member of the Piedras Blancas northern elephant seal colony. The weanling found a protected spot close to the bluff and was soon joined by other weanlings who learned together how to be elephant seals.

She learned how to swim, dive, how to look for food and how to evade potential predators. Her weanling group learning activities continued for the next eight weeks, exploring the beach and tide pools, swimming together early every morning and late every evening, and resting together during the day. These practice sessions often occurred in low or no light conditions, exactly what was needed to prepare her for learning to forage in dark, deep waters far offshore. In late April 2018 the brave weanling took off for her first migration, traveling far out to sea. She found enough food to survive and was able to evade her predators by spending 90 percent of her time deep underwater. She headed out on an instinctual migration path, traveling to the western Pacific, at 1-2 miles per hour, continuously diving and foraging for food. Four or five months later, she instinctually turned around and began to swim in the reverse direction, slowly reducing the depth of her dives as she approached land again. She came ashore for the juvenile fall haul-out, with other young elephant seals on a beach 200 miles to the north of her birthplace.

The UC Santa Cruz (UCSC) research team recorded the young seal’s presence at the Año Nuevo Reserve on November 30, 2018, and placed a hair dye mark on her flank, reading WN696. The added letter, W, was used to denote the color of her white flipper tag, the assigned color for Piedras Blancas-born seals. This larger dye mark on her side made it easier to resight her and record her movements until the Spring 2019 molt, when she was expected to shed her coat. Researchers saw her for 10 more days, before she left the beach and went back to sea or perhaps to another area in the rookery.

She departed into the Pacific for her second migration, swimming until she found rich sources of prey hundreds of miles from shore. She regularly dove to depths exceeding 500-1,000 feet, where she was able to nourish herself sufficiently to enable her to continue to grow and thrive. She beat the odds and made it through her first year while still at sea. Only half of newborn elephant seals survive their first year of life, the others succumbing to starvation, disease or predators.

A few months later she turned around and headed back to shore, returning this time, to her birth place. FES docents Jim Mentgen and Heather O’Connor were able to spot the still-visible dye mark before she began molting. They recorded their sighting of WN696 on April 15, 2019, on the Piedras Blancas rookery north beach. Welcome home WN696!

Another female northern elephant seal was also born in late January 2018 at the Año Nuevo Reserve. Researchers identified her mother and watched the pair during the nursing period. The pup was weaned and her mother left in late February. On February 24, 2018, the UCSC research team weighed the solo weanling and placed two green flipper tags, one on each flipper to identify her as part of the Año Nuevo northern elephant seal colony. They followed her during her post-weaning period and last recorded her presence on May 9, 2018, before she left for her first migration.

She swam out to sea and turned around three or four months later, returning to her birthplace at Año Nuevo Reserve for the fall haul-out. The UCSC research team recorded the first resighting of E142 on November 20, 2018. They placed hair dye marks on each of her sides, E143 on the left and E142 on the right. She remained on the beach for almost two months with the final sighting on January 13, 2019, when she was almost one year old. She then returned to sea for her second migration.

Three months later her dye marks were still visible when she came ashore 200 miles to the south, before she started to molt. FES docents Mary Forbes and Kathleen Curtis logged two separate sightings of this seal, on April 20 and 21, 2019, on the beaches at Piedras Blancas Northern Elephant Seal Rookery. They were able to easily see the two marks on each of her sides, denoting the numbers on her two green rear flipper tags (E142 and E143).

These two young female seals were born in different rookeries, to different mothers, within days of each other, 200 miles apart. They both managed to survive the first year of their lives. And, independently they somehow made it to each other’s birthplace, as well. They are both experienced travelers and great  navigators at only one year of age!

Looking to the Future

The Friends of the Elephant Seal docents are excited to collaborate with researchers at UC Santa Cruz and Cal Poly to document these resightings. Cal Poly researchers are rapidly expanding their studies of the Piedras Blancas colony. We look forward to following many more seals from birth, learning more about their  characteristics, their development and life histories.

Flipper tagging and dye-marking seals makes it possible to make these kinds of observations. In addition, it makes it easy for visitors and docents to provide citizen science resighting information to researchers, enhancing the availability of information for scientists to study. So, the next time you are visiting the rookery and see a seal with a dye mark or a tag, snap a photo and let a docent know. You might be seeing a seal that has a very interesting story!