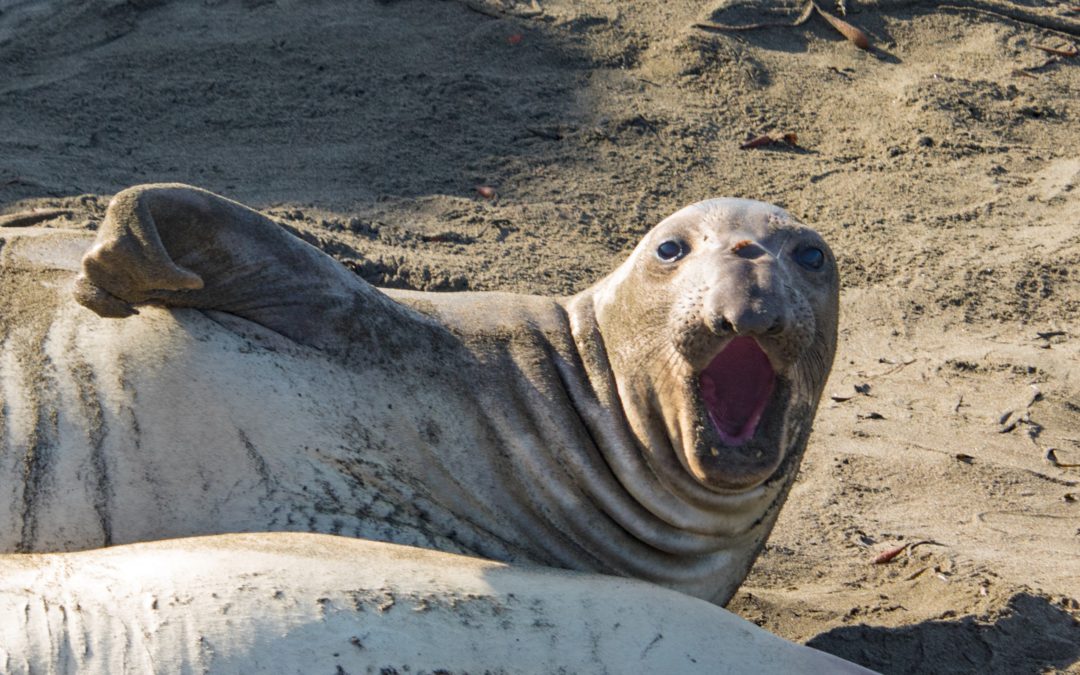 A few more weeks remain for visitors at the elephant seal rookery to observe the adorable younger seals during their fall “haul-out”.  After months of foraging at sea, juvenile elephant seals that are too young to participate in the winter birthing and breeding season haul-out on the beach for a rest.  While on the beach, they like to gather in large groups, lying very close to each other.   For the young males, engaging in some recreation at this time of the year can be the perfect antidote for too much resting time.  It is an opportunity to practice their sparring techniques in anticipation of future contests to become an alpha male for a future breeding season.

The adult males have been eating as many fish as possible for the past couple months – mostly in the Gulf of Alaska or near the Aleutian Islands.  They are now on a 30 to 40-day journey, traveling about sixty miles per day, to return to our beaches for the birthing and breeding season.  The adult males will be arriving in late November and early December.  The pregnant adult females are feeding in the open north-eastern Pacific Ocean.  These expecting mothers will be timing their return to the beach to arrive just a few days before giving birth to a 60-to-80-pound pup sometime between late December and early February.  As in recent years, about 5,000 new pups are expected to be born during this winter’s birthing season.

Males and females return to the beach from distinct locations because they tend to have different feeding strategies.  They forage in areas that have the particular prey that each feed on.  The males accept more risk by foraging along the bottom of the continental shelf and continental slope where they often encounter orcas (killer whales) and white sharks; the males who are successful are rewarded with a rich food source.  A rich food source is necessary for the males because they need to put on a lot of weight in a brief period of time.  Recent estimates suggest that foraging males consume between 200 and 300 pounds of fish per day.  Females forage for smaller fish over a longer period as they need to consume only about 44 pounds of fish per day.  With their deep dives in the open ocean, females are more successful in avoiding attacks from orcas and white sharks.  For both males and females, all of their foraging is in preparation for their stay on the beach during the birthing and breeding season. They do not eat during their stay, and this fasting causes them to lose about one-third of their body weight.